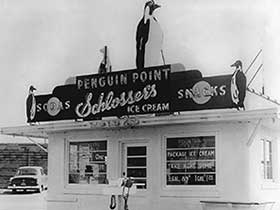 Since 1950, Penguin Point has been serving delicious burgers, fries, chicken, shakes, and tenderloin sandwiches to the great people of Indiana. We take pride in our customer service and serving quality food at an affordable price.

Penguin Point Franchise system Inc. began as a carhop drive-in on June 6, 1950 by two Stouder families Wallace and Mary Stouder and his brother Lloyd and Heleta Stouder and was only open during summer. The modern-day corporation was formed by the two brothers in June 1961 and now operates 13 restaurants in northern Indiana, a catering company, and a restaurant equipment company. The first restaurant was opened at junction of State road 13 and 15 in Wabash and still operates today as one of the top restaurants.

Penguin Point is famous for their Tenderloin sandwich that was developed in the early 1950’s by the company founder, Wallace E Stouder Sr. Penguin Point has also become widely known for fresh chicken, crinkle cut French fries and their double deck big Wally sandwich. Quality, variety, and service continue to be their focus for growth.

We create joy and opportunity through food, family, and community.

In 2018 Penguin Point was acquired by Jeff Love and his company UsAssets Inc. and is continuing expansion of the company while still providing excellent services to customers.

Indiana Restaurant Equipment Corporation was acquired in 1964 and is primarily engaged in engineering, design, and installation of institutional kitchens for schools, hospitals, jails, and nursing homes.  They also have a 12,000 square foot showroom featuring new and used equipment, supplies and gifts for the professional or home cooking enthusiast.

BLACK TIE CATERING was started in 1968 to provide in-house feeding for special events at factories.  Today, the Catering Division continues with in-house feeding and has developed a strong following in formal events such as weddings, honor dinners, and holiday banquets.  Services are available anywhere in northern Indiana for groups from 30 to 3000, read more about Catering at BlackTiecatering.com.

SEE OUR MENU
OUR LOCATIONS